You can download Sciter v.2 SDK preview from here http://terrainformatica.com/sciter/sciter2-tech-preview.zip

/bin/sciter.exe in the archive is a demo application to play with. Its sources are in /demos/sciter/ folder. After start you should see something like this: 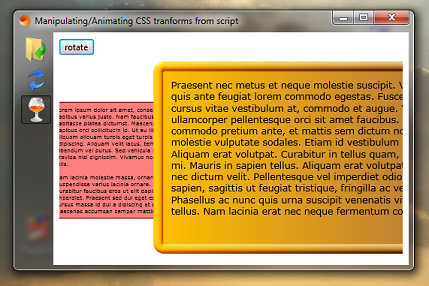 Note: this version works only on Vista/W7 as it uses Direct2D/Write graphics backend. Aero and W7 Basic DWMs only for a while.

New features in this version:

Font rendering as I’ve mentioned already is significantly different in GDI and DW. Small an basic UI fonts looks better in GDI mode. Larger fonts are better in DW. For white text on black background with small and medium font sizes the GDI rendering is the only option I think. Just load /samples/basics/test-font-rendering.htm into the Sciter and you will see what I mean.

I was forced to introduce font-rendering-mode proprietary property for applications to be able to tweak this aspect.

It appears as Direct2D/Write is a foundation for future high-DPI displays. As for now that font-rendering-mode workaround is the must I believe.